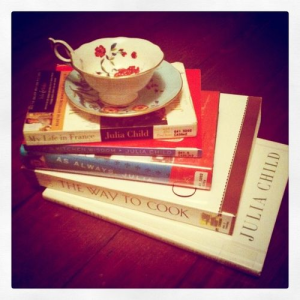 A cup of tea and a stack of Julia Child books

Welcome to Tea Tuesday, my weekly tribute to the art of having tea. As Henry James once said: “There are few hours in life more agreeable than the hour dedicated to the ceremony known as afternoon tea.

I host Tea Tuesday each week, a virtual tea party which was inspired by Christine, a follower who lives in France, who was curious about English tea traditions after watching a few episodes of Downton Abbey. The British may have failed miserably in other culinary areas, but they excel in the tea ritual. Join me every Tuesday as I dish on Downton Abbey, the Royal Family, UK tourism and other topical tea issues one might discuss at tea, served up with a tea treat recipe with a history.

My Online Guide to the Tea Ritual

Many of you will have been to the UK for the Olympics and perhaps have lingered to looking for a chance to have “afternoon tea”. To help avoid disappointment (there is a difference between afternoon and high tea), I have created a handy guide to help you enjoy the experience: Downton Abbey Cooks Online Guide to Afternoon Tea. The guide includes:

The guide also includes tips and recipes to host your own tea party, perhaps to gather friends to watch your favorite Downton Abbey episode:

You are So Social

A heart felt thank you for sharing my passion for Downton Abbey, history and food.  We have now surpassed 100,000 views here since January when I started this blog, close to 4,000 twitter followers (@downtoncooks). Check out the posted links to Facebook and Pinterest.

If you do tweet, you may wish to join me @downtoncooks, and other fans of Downton Abbey and tea from around the world by entering the hashtag #downtontea Tuesdays at 4 pm GMT, 11 am EDT, 9 am PST.

When I sent a tweet this week to Hugh Bonneville (@hughbon) asking him about the smelly lobster on set, he tweeted back saying we shouldn’t believe everything we hear or see, so take some of these reports with a grain of salt.

Julia Child would have been 100 years ago tomorrow.  She died 2 days before her 92nd birthday back in 2004.  I wrote a lengthy tribute yesterday which you can link to from here, with more about her life and how she brought French cuisine to America on a grand scale.   Her recipe for Clafouti is included which would be great to serve at tea.  Lord D loves ladyfingers with his tea, and they are great base ingredient to have on hand to make a number of desserts, including trifle. Store bought ladyfingers just aren’t the same.

From Mastering the Art of French Cooking, Vol. I; by Julia Child, Louisette Bertholle, and Simone Beck

To serve:  ladyfingers may be served as they are, with tea or fruit desserts, like charlotte russe.  Or you may make double ladyfingers by sticking the two flat sides together with apricot glaze or with butter cream.

Get Your Own Copy

It is even available in Kindle format!

A cook and historian fascinated by the fine, yet simple food of the post Edwardian period of Downton Abbey. Food makes history more fun. I live in Toronto with my husband, Lord D.